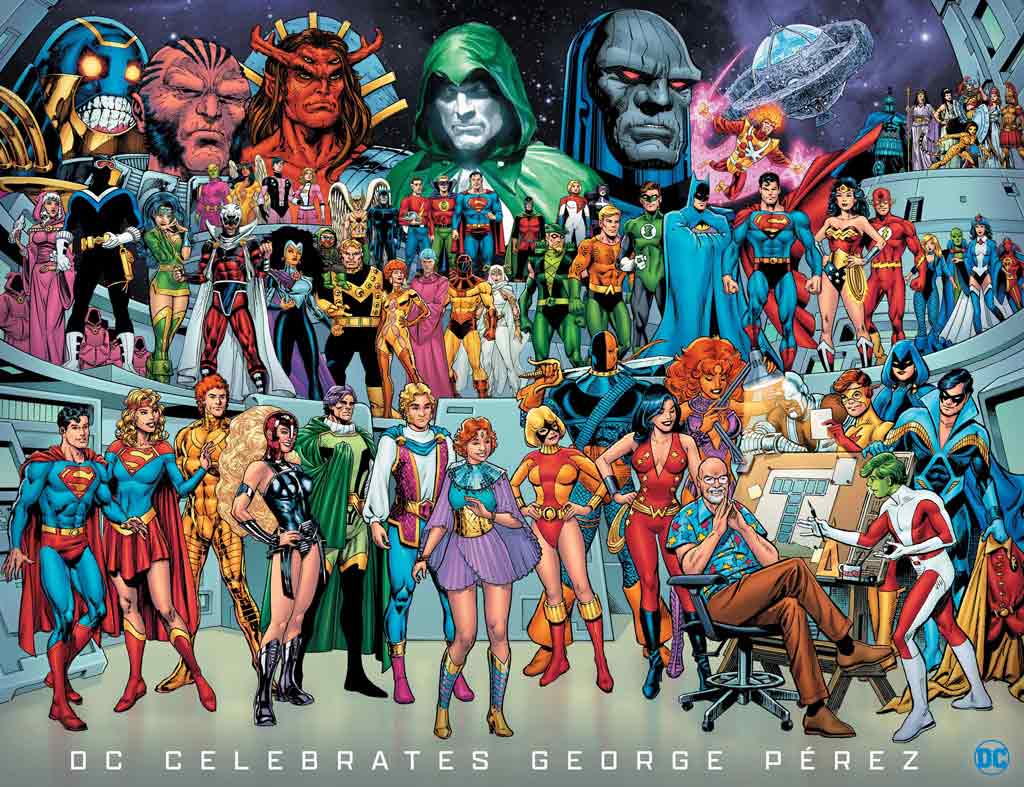 This is a bit late on here, but as my website was still undergoing renovations, I was only able to express my condolences to this great man’s family and fellow fans via social media at the time of his passing. But I still wanted to dedicated a post here to George Perez, who passed away in early May of this year.

Many of you may know George Perez through his work in a variety of comic book media. Perez penciled and helped write for a number of comics over his numerous years in the comic book industry, particularly for DC and Marvel Comics. Perhaps what the general public has to thank him most for would be his contributions to Wonder Woman as well as the story of The Infinity Gantlet, which inspired the last two Avengers movies. But George worked on countless titles, with an eye to detail and a love for the medium.

And well, for me, George helped give life to the Teen Titans. And I can’t express what that means to me enough.

I met Perez once during my college years. It was just a happy coincidence. I was going to New York Comic Con and didn’t know he’d be there till almost the last minute. I didn’t have my Starfire ready to go at the time (it was out of commission), but I didn’t care, I still wanted to meet him. What I did have was my copy of the New Teen Titans Annual #4, already signed by the writer Marv Wolfman from my adventures at San Diego Comic Con in 2009. I attended ultimately as Edward Elric from “Fullmetal Alchemist” since I had it with me at the time.

Standing in line, I frankly forgot what I was wearing. I was just me, just this geeky little college girl, eagerly waiting to meet the man who had put a pencil to paper and given faces to characters I adored. So when I got to the front and he playfully reacted to the ‘metal’ blade on my arm, I stood there confused for a moment, before recognizing what was going on and laughing.

As I handed over the issue, he said to me “Ah a classic” and “I see you already got Marv to sign.” And all the while, I sheepishly blushed and muddled through telling him how much the Titans meant to me. I told him how they got me through so much and how grateful I was to him for his work. He had the warmest smile as he handed it back to me and with vigor told me, “Of course!”

We took a photo together and even as I parted, I just kept thanking him profusely before waving goodbye. And since that day, I’ve been able to say that George didn’t just impact me with his work, but with his personality.

He was warm, genuine, and upbeat. And to me, that made sense, because I could feel that in his work. I could feel his determination and belief in good things. I could sense his love for what he did.

All that said, I know I’m not the only one who was impacted by his work. So many people can say that George’s art touched them. And I think every day he felt humbled and blessed knowing that.

The medium of storytelling brings an intrinsic, humanistic, heartfelt connection into the lives of those who would otherwise be strangers. Whether that’s through film, comics, or books of old. We can be told a story and say, “Hey, I know that feeling. That’s real. Someone else gets it.” We can feel vindicated in what may feel like weakness. We can be given hope that there are grander things that await us, regardless of our shortcomings. And we can believe that goodness will prevail.

I think that was one of the gifts that George imparted with his work and his own heart. He provided worlds of adventure and tales that told us ‘Don’t give up! You’ve got this!’ And I think that’s why he’ll be missed so much. Because honestly, I think most of us need that. I think a lot of people loved him because he told others to believe in and to do good. And because he embodied that belief even until the end.

So from the bottom of my heart, thank you George, for everything you did. And I pray for your family to be comforted in their grief by the gratitude of many fans for your work as well as by the knowledge of your legacy of art and goodness which will last many, many lifetimes. I am so grateful that they shared you with all of us.

George and his wife, Carol

Best regards, may you rest in peace, and thank you, George, for everything.