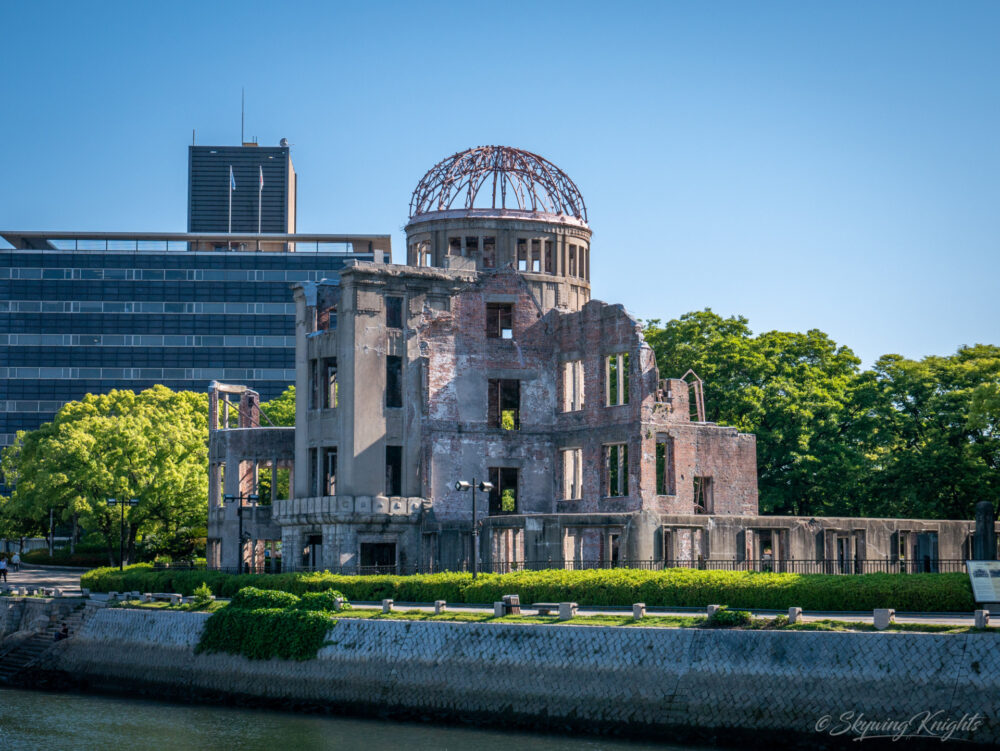 “I will write peace on your wings and you will fly all over the world.” – Sadako Sasaki  (佐々木 禎子)

Today’s post is about one of my recent adventures in Japan in the beautiful city of Hiroshima (広島). I never got the chance to go to Hiroshima while living in Japan. So in May when I went back, I made sure to add it to my list of places to visit. Unlike many places I’ve visited in Japan, Hiroshima was different primarily due to its historic nature.  (I hope I can write about it here with the respect that it deserves in this blog post.) I wouldn’t equate Hiroshima to ‘Always Happening’ like I would Osaka or to “Always Busy” like I would Tokyo. Rather, I think I would equate Hiroshima with the phrase “Always Hopeful”.

Hiroshima, for everything this city went through, remains to this day hopeful. One can see this as they explore the historic monuments surrounding the Peace Park. Not to mention it’s present when one ventures into the city center itself. It’s a lively active area rebuilt into an industrious, booming economic and social center. So let’s get started on this adventure today and see just why the iconic Peace Park, though it contains melancholy relics of the past, leads the city in its hopeful goals for the future. And maybe, you’ll find new reasons to come to Hiroshima.

(All links send to English homepages of locations mentioned)

The other is via the Shinkansen, or Bullet Train. If you’re willing to upgrade and pay for the Nozomi train (のぞみ), the Shinkansen to and from Tokyo Station and Hiroshima Station is about 4 hours. (It also takes about an hour to reach Tokyo Station from Narita Airport, written as “成田国際空港”.) In retrospect, even though the flight there was only 90 minutes itself, the wait time between the two flights and the bus to and from the airport to the city center made it so that it took about the same amount of time to get there. Going by plane was certainly the cheaper option, but the train would have been far more comfortable. (It’s hard to beat JR though).

Just a note for those considering buying and using a JR Rail Pass, the JR Shinkansen Nozomi is the fastest train in the fleet – however, if you’re traveling in Japan via the JR Pass, your pass will not include passage on the Nozomi. Thus, you will need to take the Sakura (さくら) or Hikari (ひかり) lines which do add time. Now, you can upgrade to the Nozomi. But at that point, you might as well just pay for a regular full passage ticket instead of the JR pass if the trip to Hiroshima is the only reason you’re getting it. The Sakura and Hikari lines to and from Tokyo and Hiroshima will add 1.5 hours to your trip each way.

In any case, after arriving in Hiroshima, I stayed for two nights. The first day I took a day trip to Miyajima (宮島), or Shrine Island, which was a quick 30-40 minute train and ferry ride away. But in the evening of that day and the morning of the next, I explored Hiroshima city center. When I travel, I tend to seek out photographic locations. So with a day in Hiroshima, I went for some of the landmark locations and experiences. While Hiroshima has many parks, museums, a castle, and shopping centers, as Hiroshima is known internationally as the “City of Peace” upon which the first Atomic Bomb was dropped, I focused most of my visit around the area surrounding the Hiroshima Peace Memorial (“Hiroshima Heiwa Kinenhi” or “広島平和記念碑”), also known as “Genbaku Dome” (“原爆ドーム”), “The A-Dome”, “Atomic Bomb Dome” or “A-Bomb Dome”.

(You can also read more about my adventures in Miyajima Here.) 😉

In mentioning of the atomic bomb dropping though, let me clear up any rumors or myths surrounding Hiroshima. Some regarding radiation before we go any further to be specific. Today, Hiroshima is just as radioactive as any other place in the world. This meaning it’s just as safe as visiting Tokyo or Seoul or Beijing or New York City. When the atomic bomb, dubbed “Little Boy”, was dropped by the aircraft bomber the Enola Gay, it created a massive amount of radiation. Most of the radiation settled in the air though as it was detonated above the city. Air moves. So while it was very dangerous in the few years following, today, the area is safe to visit.

I visited Ground Zero first as it was on my way to Genbaku Dome. Ground Zero, the area exactly over which the bomb was dropped isn’t exactly a ‘this is the spot’ type place. A clinic now stands there with only a plaque serving as a reminder to what happened nearly 80 years ago. It doesn’t draw attention to itself, but I think that is on purpose. After Ground Zero, the closest place to visit was Genbaku Dome, a short 5 walk away.

Genbaku Dome was originally the Hiroshima Prefectural Industrial Promotional Hall (“Hiroshima-ken Sangyōshōrei-kan” or “広島県産業奨励館”)  prior to the bomb’s detonation and was one of the few buildings to still stand after the blast (surprisingly, very close to Ground Zero). Named a UNESCO World Heritage Site in 1996, the building is stirringly chilling and in all honesty, a bit of a doleful place to go to, at least it was to me. It’s not like many sites you may visit in Japan, where you’re going to take smiling selfies in front of it (and just for the record, please don’t do that here).

It’s very somber, reminding me of many memorial battlefields I visited while growing up. It’s a palpable reminder of the event and of those who died with the dropping of the bomb. Regardless, I think it’s an important place to go to. In its stillness, it stands as though to teach you about humanity while somehow, I felt anyway, also seemingly reminding you that things can indeed still rise from the ashes even after horrific events.

Peace for the Future

In addition to Genbaku Dome, across the Motoyasu river or “Motoyasu-gawa” (“元安川”) (which branches off the Ota River, written as “太田川”) stands another iconic landmark within the Peace Park, the Children’s Peace Monument or “Genbaku no Ko no Zou” (原爆の子の像 lit. “Atomic Bomb Children’s Statue”).

With a statue of the Sadako Sasaki, a young girl who survived the atomic bomb (atomic bomb survivors are now known in Japan as a “hibakusha” / “被爆者”) only to pass away due to radiation poisoning leading to leukemia, stands at the top of the structure. She holds a paper crane above her, representing her quest to fold 1,000 paper cranes. According to Japanese legend this would grant the folder one wish. Dedicated in 1958, the memorial is dedicated to all the children who lost their lives due to the dropping of the bomb, as well as Sadako-san’s wish for there to be a world without nuclear weapons.

From the Children’s Peace Monument, it is an easy walk to the Hiroshima Flame of Peace (“平和の灯”). The Flame has been burning since 1964. It will not be put out until all nuclear bombs on the earth are destroyed. This means the flame has now been burning for over 50 years. Beyond the Flame of Peace stands the Cenotaph, or designated tomb of those who died in the blast. As many of the bodies were incinerated instantly, the Cenotaph is small. There was a little bowl standing in front of it reading “Hiroshima” (ヒロシマ) in Japanese Katakana representing the lost lives. It’s powerful, because with so much devastation, the natural inclination would be to think that thousands of bodies would have been found, but with a nuclear weapon, it was not so – everything was so utterly destroyed.

Near the Cenotaph stands the Hiroshima Peace Memorial Museum 広島市平和記念資料館, which opened at 8:30 AM for me, along with the Hiroshima National Peace Memorial Hall for the Atomic Bomb Victims 国立広島原爆死没者追悼平和祈念館. I highly recommend going into the Museum. With Hiroshima so vibrant as it is today, the museum paints a starkly contrasting image as to what it must have been like directly before and after the dropping of the bomb by the Enola Gay. After making my way through the museum, I went on to the Memorial Hall. Inside of which, one can experience an entire 360-Degree effect of what one might have seen after the blast. As with many of the locations within the Peace Park, this view displayed a complete contrast to the Hiroshima of 1945 and the Hiroshima of today.

Dedicated to Hope in Hiroshima

During my walks to and from these sights around Genbaku Dome, like I said, it was a very somber route. Having lived in Japan, I know people, children, who had been born and lived in Hiroshima. It was unnerving to me. I thought about if they had been born 80 years earlier. If that had been the case, they might have died or suffered in that blast or after. I continued to walk and see the quiet simplicity and symbolism within these dedications to Peace. It became more than just an event that I’d read about in textbooks. It was a very real thing that happened to real people and it hit home.

But even still, Hiroshima, for me, was truly a city of hope. Genbaku Dome, which many people picture when they think of Hiroshima, serves as a reminder of the destruction of war. Not to mention, a warning to future generations. But Hiroshima itself, completely rebuilt and standing tall, vibrant, and full of life. It serves as a beacon to the world that humankind can overcome devastation. Tasting the Okonomiyaki (which yes, I did make a point to do), riding the trains, and breathing in the fresh sea air gave me nothing but a rich desire to more fully love and give love. Perhaps that is the greatest lesson we can learn from the atrocities of war.

At the Children’s Peace Memorial, one can read:

May we all have that wish and prayer in our hearts. I hope you all get the chance to visit this historic, vibrant, and beautiful city. Not only to see Peace Park, but the rest of Hiroshima as well. Like this city in southwest Japan, I believe we too can recover and grow stronger from our pasts. Let us all be like Hiroshima then and if you get a chance, be sure to go. It’s an experience worth having.

PS. To see more of my photos from Hiroshima, please visit my Photography page.

Btw, the Okonomiyaki was deliciousssss. <3