After Zero barely survived an attack by the Pureblood vampire Shizuka Hio on his family, he went on to live with Kain Cross and his adopted daughter Yuki. Years have passed and he’s opened up a little – his one wish to destroy all vampires.

But Yuki still is unaware of one of Zero’s deepest and darkest held secrets regarding the true events of that dark snowy night all of those years… and how it changed him forever.

"They're beasts in human form."

This costume was a combination of using previous items that I had from my Day Class uniform version of Zero as well as creating… all the vines… from scratch. Yeah… that was a head scratcher at first. I decided to use a wire apparatus in order to achieve the ‘alive’ look of the vines seen in the manga, since I didn’t want it to just…. Lay on top of me. I wanted the vines to appear to be floating dang it!

I had just gotten a sewing mannequin for Christmas at the time. So I decided to put a dress shirt on it and begin bending and wrapping the wire around the mannequin to create the shape. Problem was… yeah, wires need something to hold onto. To remedy this, I used invisible thread attached to tiny safety pins which held onto the dress shirt in strategic places. These acted as anchors for keeping the wiring up.

Once I had the wires set in place, I grafted fake vines onto and around them. The hardest part was taking the whole thing off and spray painting the wiring green to further hide the wires in the vines. Actually, I take it back, the hardest part is ALWAYS putting the apparatus back on a shirt before putting it on. Overall though I’m very happy with the resulting look. 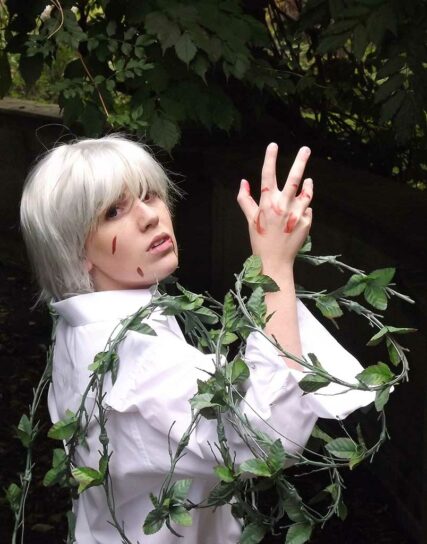 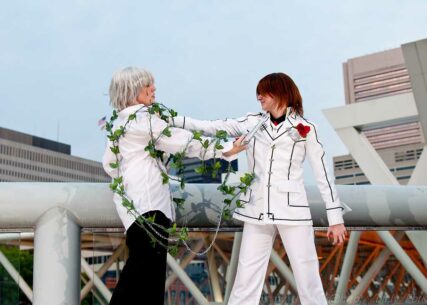 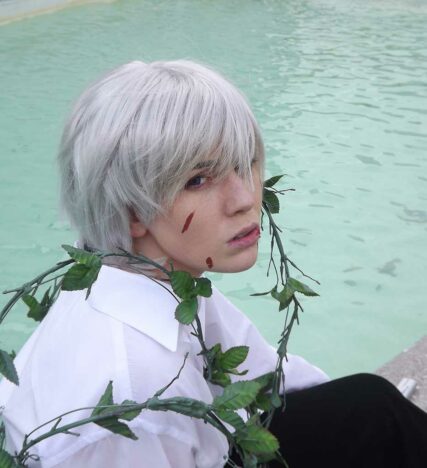 My first cosplay of Zero really required little of me. And being neck deep in love with the series at the time, I really wanted to do another version of Zero that I made by hand. The thing was, I wasn’t really sure I could devote enough time to making one of the super special awesomely overly designed artbook renditions of him. College still existed for me at that time after all and my Japanese classes were calling me. But again, I wanted to do SOMETHING. And as always, I wanted to do something different that tested me. And it was then that the idea to do the vines hit me. Great. Just… barely easier than an elaborate coat.

But since then it’s become my favorite version of Zero. I’d love to do another photoshoot in this similar to the bloody bathtub rendition I did of him – more blood, more fun, at least in photoshoots, haha. I think this costume also marked a bit of a turning point for me in that this was around when I really started to think more heavily about the part of make up in my cosplays. While I didn’t do a lot of make up here, what I did do really gave me the push to continue down the path of finding how I could use make up to my benefit. For that reason and of course, because I love this version of Zero, I’d really love to bring this version of him out in full force once again. 🙂