An unruly bishop at the 7th District’s church, Frau might just be Teito Klein’s least favorite person to have encountered since his escape from the Barsburg Military Academy and Prison. Though Frau undoubtedly exhibits questionable behavior for a “Bishop”, there’s something about the way he gets rid of Kor, evil entities out to do the bidding of Verloren, a fallen servant of the Chief of Heaven, that points to the fact that Frau may know a lot more about Verloren’s replacements, the Seven Ghosts who are set to protect mankind’s souls, than your average member of the clergy.

"A loveless justice lacks righteousness. A person who doesn't forgive is the same as darkness."

After having so much fun going as Frau in his Bishop Robes for Otakon, I couldn’t resist the idea of making another of his outfits. I was able to use a good portion of my last cosplay for Frau in this one, such as the pants, earrings, contacts, wig, etc (though I did eventually remake the pants). I re-used the Scythe as well from my last Frau cosplay and was pretty excited too, since I was able to get pictures of it in its elongated version. However, the coat and body suit were new for this outfit as were the jewelry pieces. While I put together the other pieces, I commissioned the cuff by The Etsy Alchemy Convobot. And I fell in love with it as soon as I got it! Such a great piece!

The coat was the hardest part to put together for this cosplay. So. Many. Buckles. And. Collars. O_O I started with a basic jacket design and went from there. I made the jacket longer and then added an extra collar (for the one that flairs up). That collar… so much work. Gave me such a headache. After that though, I added on the loops around the wrists of the sleeves and afterwards finish adding in the buckles around the coat. All that work was worth it though! As I was very happy with the result! 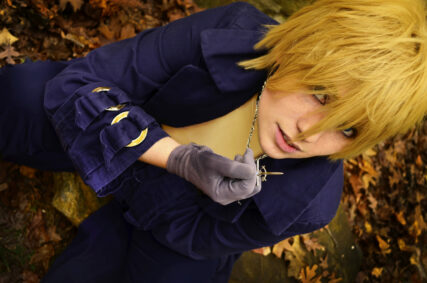 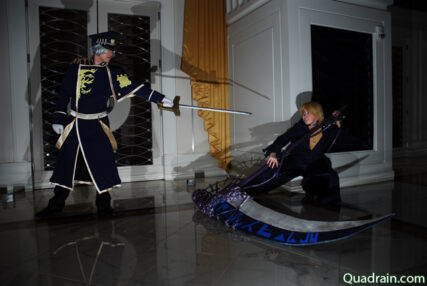 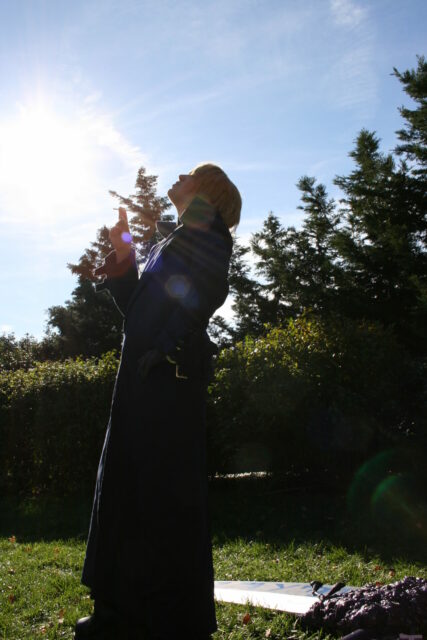 "As long as I am in your thoughts, my heart will always be with you."

Gosh darn it, Frau still remains one of my favorite characters, even to this day. I think he just reminds me of that older brother I /wish/ I had. -shrugs- I think part of the reason I like his character so much though is because he’s had a rough past and he’s had to wrestle with the Chief of Heaven (or God) so to speak about the injustices he’s seen in his life and how they can possibly be fair. He’s asked the tough questions. He’s even tried walking away, but he comes back because he knows that the morality taught by those who follow the Chief of Heaven – to protect and love people, is in fact true, righteous, and good. And though it may not always be easy, it’s worth it, ultimately. I think we can all learn a lot from that.

And just, gah, I love this outfit sooooooo much. I need to re-shoot this thing like NOW…. and listen to something Junichi Suwabe in it. That too.